What's the Story Behind Rainbow Ranch?

Back in the day, traveling through Gallatin Canyon meant following a harrowing game trail along the Gallatin River. As described by the 1883 Avant Courier, "A dizzy bridle path [that] leads along the side of the mountain. The range rises abruptly some 1,500 feet above the path. An equal distance below, flow the waters --boiling, seething --madly dashing in their course to the Gulf."

By the 1880s, the cattle industry was steadily growing, and cattlemen were herding their cows single file over the treacherous trail. Ranchers wanted a road through the canyon to get their beef into eastern markets and to increase their grazing land in the summer. Prospectors were looking for a way to mine the minerals within the canyon and needed an easier way to haul supplies. The narrow trail also made it difficult to supply the lumber camps. One of the earliest homesteaders, Thomas Michener, lobbied hard for the road, collecting hundreds of names on a petition. Eventually, the road was built, connecting Bozeman to the west entrance to Yellowstone National Park.

Homesteading in the mountains was much different than the plains. Lured by gold, prospectors saw the economic potential and flocked to Western Montana. They had good water, plenty of wood for fuel and building, and lots of game for food. They grazed cattle and cut wild hay. The rivers provided irrigation in areas like Gallatin Valley, which allowed farmers to grow abundant crops. Whereas, on the plains, homesteaders relied on dry-land farming in areas often prone to drought. 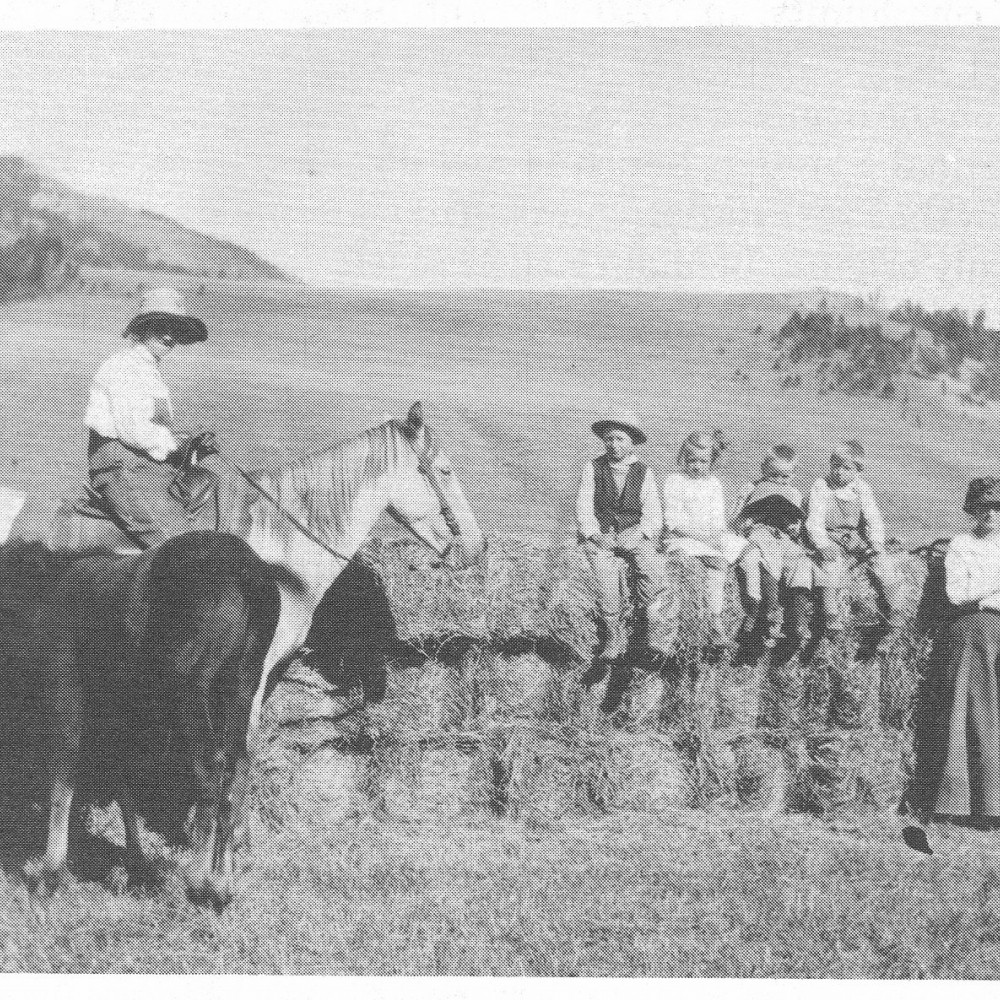 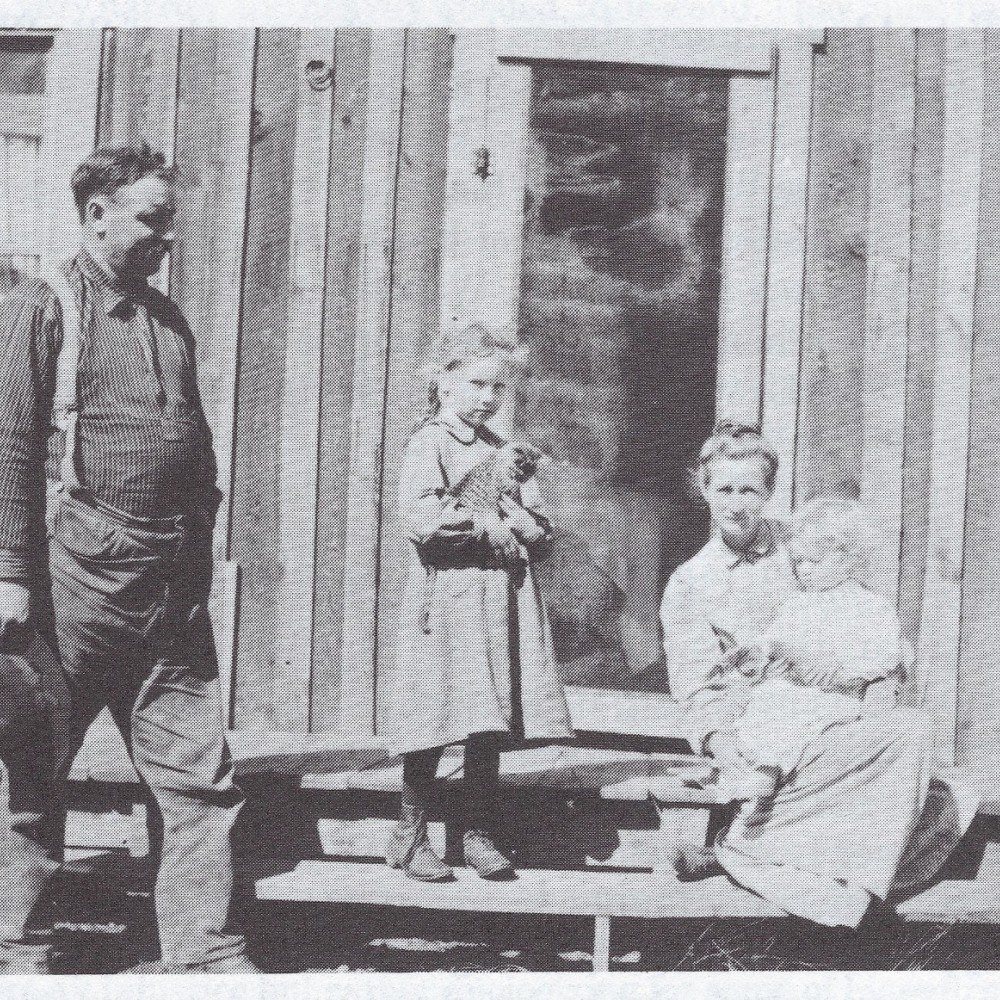 After marrying in 1898, Thomas Michener and Mary Elizabeth (Mamie) Lockhart set out on the newly constructed road for their homestead. They brought horses, a milk cow, winter supplies, a maple drop-leaf dining table, and a ten-volume set of the Ridpath World History.

Montana's Gallatin Canyon: A Gem in the Treasure State by Janet Cronin and Dorothy Vick describes their home,

"Mamie divided their one-room cabin into two rooms by hanging a curtain across a corner to make a bedroom. Dirt provided insulation for the tarpaper roof. Enterprising Mamie had brought along a good supply of oilcloth to tack to the ceiling to keep the dirt and dust from sifting through. The Micheners heated their cabin with a potbelly stove and with a fire in the little sheet-iron cookstove called the "Sheepherder's Stove."

By 1900 the family had improved its home by adding a large kitchen, living room, and dining room to the original cabin. Tom built the additional rooms from lumber sawed at the mill brought in by his brother Bert. The Michener home was the first non-log cabin in the canyon. The new white pine floors filled Mamie with pride. She would get a bucket of sand from the river and scrub the floors to keep them white. The men would then come home and track in dirt, and Mamie had to clean the floor again."

The Micheners had six children; their daughter Ora would go on to marry Stanley Lemon, the son of the founders of Rainbow Ranch, R.B. Lemon, and Pearl Armstrong Lemon. In 1919, the Micheners moved out of Gallatin Canyon, and a year later, the Lemons arrived in their fancy Hall automobile (which they soon had to trade for a Model T truck due to the harsh winter driving conditions.) The Lemons took up residency at Twin Cabins Creek. They built a lodge called the Halfway Inn—a nod to the location being halfway between Bozeman and Yellowstone National Park. The Lemons kept a few guests and a store for those traveling to the park.

"This was the Rainbow Ranch of my childhood. We always had the first cabin past the sawmill, on the bank of the river. Many mornings began with the sharp whistle blasts from the sawmill as they began work for the day. A little ahead of that, the sounds of the milk cows would carry across the river and up the hill. A squirrel would have been greeting the morning from his post in the solitary tree next to the outhouse. Lemon's beautiful Red Irish Setter named Spud would be laying by the front steps, knowing we were always good for a pancake or a biscuit when breakfast was over. So far as I was concerned, this place was a little slice of heaven here on earth." -Donna Klindt, guest

In the 1930s, the Lemons added the Eat Here Café, and the ranch became a full working guest ranch with cabins, cattle, a restaurant, and a small gas station.

"I think of great fondness of the mornings when Pearl, Burt's wife, would invite me into her kitchen and let me have, however many pancakes I could stuff down. Those would be mornings when I got to get the milk. The smell of wood smoke constantly drifted through the air, and when the day promised to be warm, the dark log interior was cool. Pearl had several cages of canaries who sang their cheery songs as the morning sun came through the multiple-paned windows. Pearl's bright red nail polish and lipstick were every bit cheerful as her canaries. Mr. Lemon might come in while I was there, a tall, thin man and always in bib overalls. He had very kind, twinkly eyes. He even let me ride on a load of hay on the wagon one year, pulled by a team of horses, of course, not a tractor." -Donna Klindt, guest 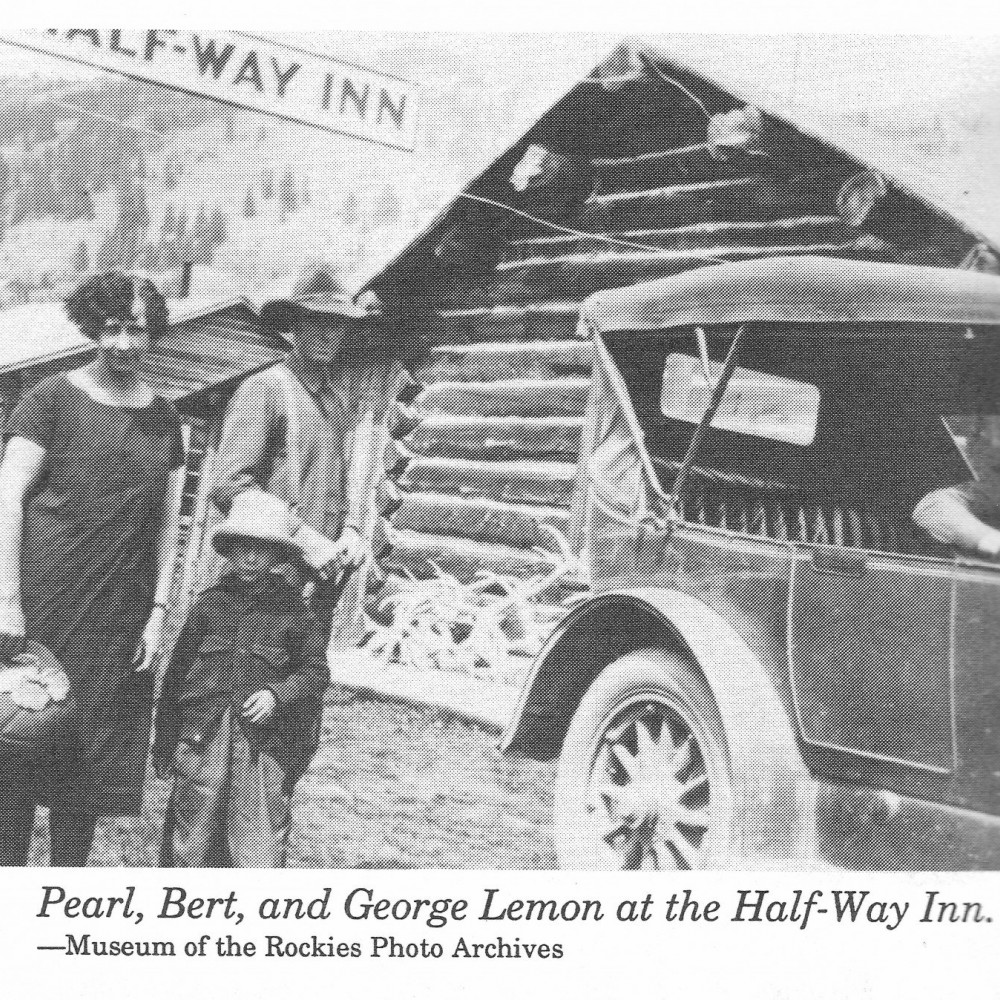 Walter and Francis Cottrell bought the ranch in 1945 and re-named it Rainbow Ranch after the brightly colored, striped rainbow roof. It's been said that during this time, Francis baked ten pies a day!

Through the years, the ranch was sold a couple more times, eventually landing with the brothers Tom and Dennis Davidson in 1995. The brothers did extensive remodeling and added the Riverside Luxury rooms. In 1997 the wine list at Rainbow Ranch Restaurant won a Wine Spectator Award, the first of what is now 12 awards, the most recent received in 2020! This humble little ranch was well on its way of making a name for itself.

By this time, the ranch was a popular place for weddings, and more event space was needed. An outdoor gazebo with a kitchen and a tent adjoining the barn were perfect additions. Eventually, they added the Bacchus Room, a private wine cellar, for the award-winning wine list. 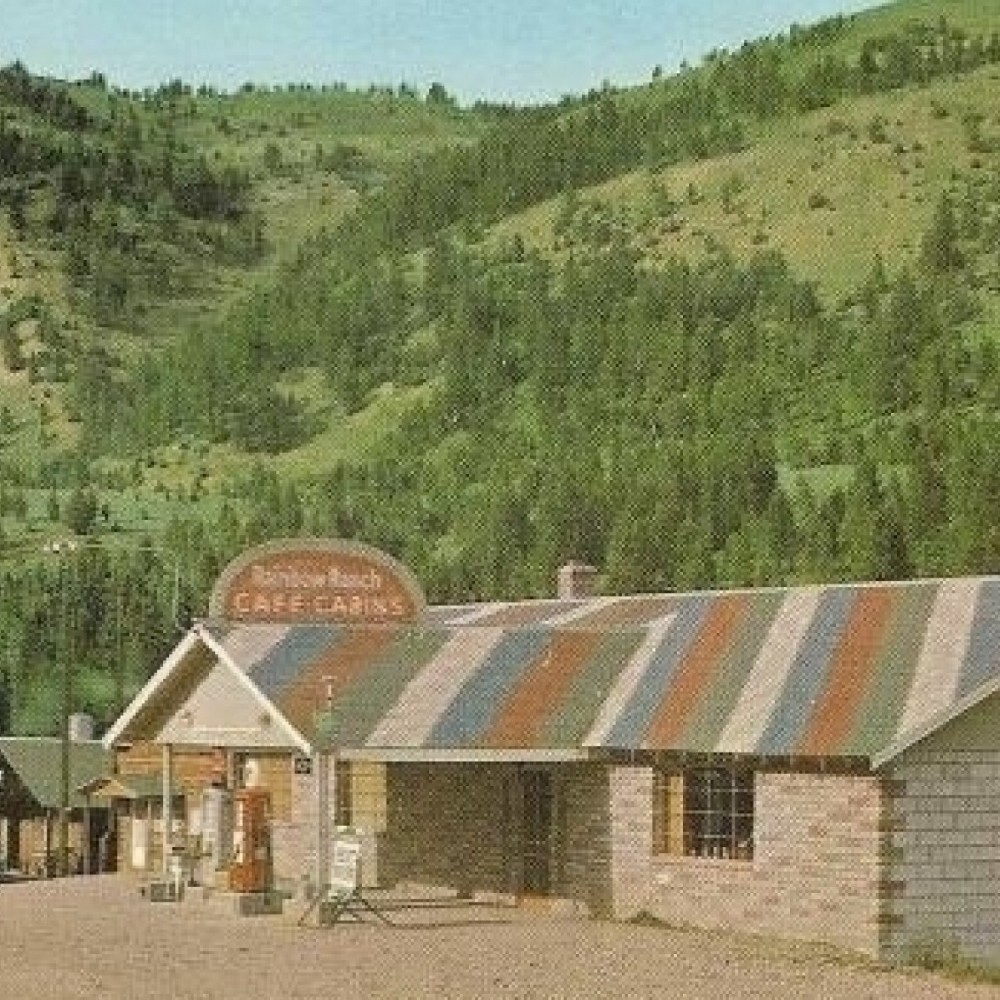 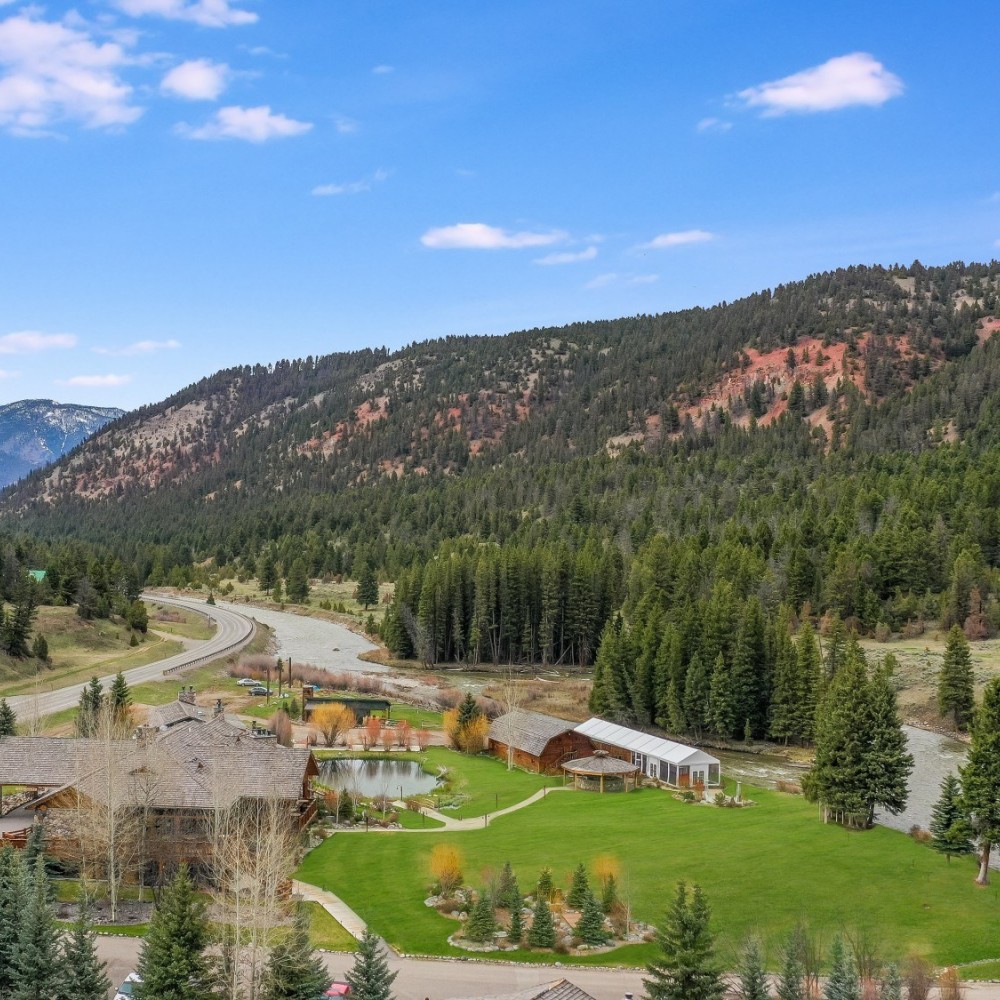 In 2004, a trio from Chicago, Aneta Tomaszkeiwicz, Iwona Korzeniowska, and Kate Armstrong bought the ranch. They added five new rooms, one suite, a trout pond, and an outdoor infinity hot tub next to a massive river rock fireplace.

In 2011, Scott Gibson fell in love with the property, the local area, and Montana in general. He purchased Rainbow Ranch with the vision of it being the best wedding and event space in Montana. Since then, he has invested extensively in the property, including the tent by the barn, new landscaping, lights, and a new fire pit, hot tub, and deck. He is committed to preserving Rainbow Ranch for everyone to enjoy for years to come.